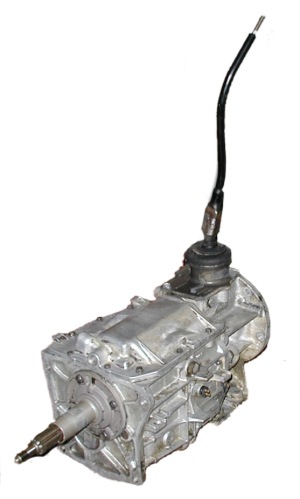 These transmissions are popularly replaced with the SM420 and SM465 transmissions, since they share a similar bellhousing bolt pattern and compact installations.

The T4 / T5 is a top loaded, top shifting transmission with the shifter being located in the rear section of the transmission. It is fully synchronized in all gears. All gears are helically cut.

The T4 / T5 transmission case is 9-1/4" long in addition to its 6" shifter / tailhousing assembly; for a 15-1/4" total length. It features a cast aluminum top cover that is retained by eleven bolts and a main case of cast aluminum.

Typical Borg Warner casting numbers found on the T4are 13-51 and 13-52 for the T5. The shifter is curved, instead of an angular bend like the T176. The transmission is the progeny of the SR4, so they look similar and are occasionally confused.

A strengthened version of the T5 called the "World Class" was available and parts were formerly available to address some of the transmission's weaknesses. However, even with these, splines shear and the cases stretch under torque and no such upgrades could prevent some failures.

As the T4 / T5 was married to the Jeep engines mentioned above, it is OEM compatible with them.

Because of the transmission's weak service record behind stock Jeep powerplants, we do not offer any conversion to V6 or V8 power. This is essentially a small car transmission in a truck. The customer's time and efforts are best spent converting to a stronger transmission. These details are discussed in this article.