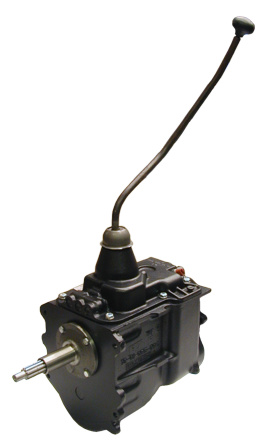 For its first several years in production, the T18 used the same case and top cover as its predecessor, the T98. As such, it may be required to pop the top cover and verify by internal features. Top cover castings that say T98 may actually well be a T18, since they used the same castings.

Jeep and IH T18s typically have 6-spline and threaded end output shafts onto which the Dana transfer case gear installs directly. 1980 and later Jeep T18s (found in J-Trucks only) featured a 31-spline output shaft that - like the Ford versions - was excessively long for installation into any short wheelbase Jeep.

There are two different versions of shift control housings. The 1966-1978 versions hung two cast iron shift forks into the case, with the reverse fork itself pivoting on the side of the case. These earlier T18’s have reverse gear over to the right and up by third gear. In 1979, the reverse shifter fork was moved from the side of the case into the top cover instead and all three forks were changed and made with die-cast aluminum. This later T18 has reverse gear shift pattern over to the right and down by fourth gear.

The earlier shifter versions are readily obvious by the presence of a cast-in boss on the rear, left flank of the transmission. Later Borg-Warner casting tooling was updated and omitted this boss (as in the image, above right).

The Ford T18 has a 1-1/16" diameter, ten spline input shaft that has a stick-out of 6-1/2" from the front face of the transmission. The pilot tip of the transmission measures ~17mm. The front bearing retainer flange measures ~4.85" and the bearing retainer tube is 1.43" in diameter. The front bolt pattern is the symmetrical Ford "butterfly" pattern; roughly 8-1/2" wide by 6-5/16" tall. The input shaft stick-out length is 6-1/2". Checking these dimensions will verify that the transmission is a 1966 or newer model, precluding it from being the T98.

The Ford versions can also be identified by its casting numbers cast into the driver's side of the case, commonly "T18-1E" for earlier units and "13-01" for later units. From 1966 until 1978, many T18s used a T98 shifter assembly. 1979 and newer T18s used a three fork shift cover assembly that shifts reverse gear directly. Because of this, reverse location is on the opposite side of neutral than the earlier version ('66 to '78). Earlier versions reverse gears shifts over and up - later versions shift over and down.

The Ford T18 features a power-take-off (PTO) port on the passenger side of the case.

The last years of the T18 featured a direct-drive (4th gear) switch to signal a lean or cruise mode operation to the Engine Control Module (ECM). Later Ford T18's and T19's used an aluminum front bearing retainer in lieu of the earlier and longer wearing cast iron retainers. We can supply new cast iron retainers to replace these.

If you can locate the production ID tag on your Ford T18 top cover, you will find a lettering code akin to “D7T3...”. This may help identify the year of transmission, as Ford uses the first letter to designate the decade (C=’60s, D=’70s, etc.) and the year is called out by the second digit.

A certainly rare version of the Ford T18 was the T18B, as provided in diesel trucks from 1967-1972, featuring higher gear ratios in 1st thru 3rd gears (4.32, 2.26, 1.51). This transmission will be very rarely encountered, but individuals should be aware of the possibility.

Jeep released 12 known versions of the T18 transmissions from 1966 and 1984, with the greatest variations being in input shaft configurations and gearing. The battle of working with these is compounded if you did not actually witness the transmission's removal from the donor vehicle.

All Jeep T18's locate their PTO port on the driver's side.

Ford vs. Jeep T18's The Ford T18's are clearly the best conversion choices in that they are far more standardized, easier to find and often more affordable. Replacement parts (namely, gears and shafts) for the Ford T18 are easily less expensive. Many, if not most, of the Jeep specific gears are no longer produced, making them painfully problematic to own if anything ever goes wrong or if parts interchangeability is required for a specific, non-standard adaptation.

As a general rule, all FSJ T18's featured varying lengths of input shafts - all too long for installation into short wheelbased Jeeps. These were fitted with a variety of factory adapters and deeper bellhousings to accomodate the deeper bulkheads of these larger Jeeps. We get many calls from individuals attempting to adapt these versions into CJ Jeeps - many of them being sold under the unscrupulous pretense that they are inexpensive and direct replacements. Individuals get caught in often fruitless salvage searches for the rarest of the Jeep T18 input shafts and bearing retainers in an attempt to make the project succeed. As a solution for wide ratio (6.32:1 first gear) Jeep T18's, we offer a new input shaft and retainer assembly, kit #T18-ISK. There is currently no solution for the narrow ratio (4.02:1) Jeep T18's.

This transmission is a good unit, but not recommended for Jeep conversions due to its unique input shaft and front, stud-mounted style front face.

IH T18's we've seen in our collection locate their PTO port on the driver's side, and according to IH literature, could have dual PTO ports.

Very much similar to the T18 in appearance and build is the T19. This four-speed transmission is different from the T18 and others in that it usually features taller gearing and a synchronized first gear. It was introduced in Ford trucks in the 1968 model year.

The IH Scout T19 was available from 1975 to 1980 with close and wide ratio options. Individuals may encounter a casting number 13-09-065-905. Like for the IH T18, the T19 had a unique case and input shaft that make most Jeep conversions impractically expensive.

The Ford T18 can be adapted to the popular Jeep (and many IH) transfer cases, including the: 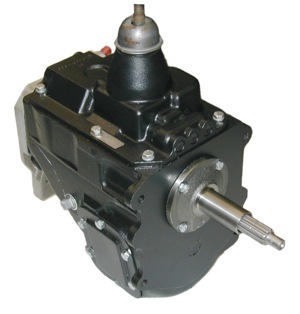 A turn-key T18, professionally built, adapted or OEM style and delivered to your door - ready for a variety of engines and Jeep transfer cases. Read more...

The Jeep and most IH T18's can be adapted to the Jeep Dana 300 and to the New Process transfer cases with equal ease.

As the reader will conclude, the Ford T18 will marry directly to Ford Small Block style bellhousing.

The Ford T18 is also an excellent candidate for AMC Jeep bellhousings made from 1976 to 1986 that were married to the T150, T18 and T176 transmissions, or otherwise have an available bellhousing bolt pattern of 8-1/2" wide by 6-5/16" tall. They are readily compatible with these engines and bellhousings, and need only a custom pilot bushing. For more details, see Adapting Ford Transmissions to AMC Bellhousings for details.

When filling your T18 / T19 with gear oil, we recommend that you select a conventional mineral oil or a para-synthetic in lieu of a full synthetic oil. Properly assembled manual gearboxes do not have the thermal strains seen by combustion engines or hypoid gears. Synthetic fluid in these gearboxes, while not harmful, is probably an economic waste.

Certain versions of the Jeep T18 can be married to GM engines.Read more about this process here.

The T18 and T19 are relatively simple to rebuild. Many shadetree mechanics do very outstanding rebuilds if they have access to a press, snap ring pliers and bearing pullers. Many choose to do a full rebuild during the adaptation process, and our instruction guides feature all the details, diagrams, pics and tricks required to do professional level work. 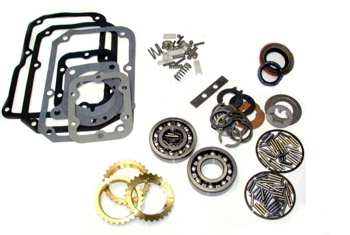