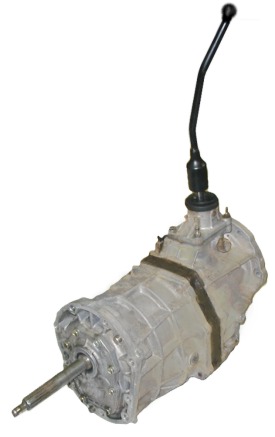 The AX5 is prevalent, but sadly it's strength is minimal, making it a questionable off-road transmission. Failures behind even stock engines are not uncommon. We do not make any conversions components available to retain the AX5 with six or eight cylinder engines.

Note that there is an AX4 transmission in early XJ models, which is essentially the AX5, minus its overdriven fifth gear.

Two variants of the AX5 include the G52, W58, and R151 as found in Toyota car and light truck applications.

The AX5 is a split-case, top shifting, overdrive transmission with the shifter being located in the rear section of the transmission. The AX5 is fully synchronized in all gears. All gears are helically cut.

The AX5 transmission case is 15-5/8" long. It features a cast aluminum case with a cast-iron mid-plate. The case is ribbed and features the shifter in the rear quarter of the assembly. In the vein of newer transmissions, the AX5 uses dowel pins for bellhousing alignment.

The Jeep AX5 has a 21 spline output shaft for connecting to the transfer case input shaft. The AX5 was used with an internal slave/throwout assembly up through the 1994 model year. In 1995, a more conventional slave cylinder and cross-arm were used. The input shaft is a 14 spline and its stickout length is 7-1/2".

The AX5 looks similar to the AX15 and they are occasionally confused in identification as well as interchange.

The Jeep AX5 was factory-married to the Jeep New Process (aka New Venture) Model 231 transfer case.

AMC / Mopar Jeep
As the AX5 was married to the Jeep engines mentioned above, it is OEM compatible with them.

Individuals, hoping to replace their AX5 occasionally assume the AX15 will replace it directly. The bellhousing patterns and spline counts between these similar-appearing transmissions are deceivingly close, but not compatible.

The 2.5L Jeep/AMC engine can be backed with an SM420 or SM465 transmission using our #B150GM kit. This is a somewhat advanced conversion, but a successful one. Read more...

The current, best all-around strategy for replacing the AX5 is to replace it with a 2.5L engine and transmission whose strengths are better matched for the duties of a Jeep, as discussed below.

GM
Because of the transmission's weak service record behind even stock Jeep powerplants, we do not offer any conversion to V6 or V8 power. This is essentially a small car transmission in a truck. The customer's efforts and funds are best spent converting to a stronger transmission during the engine upgrade. This is not a difficult thing at all and these details are discussed in the following articles: