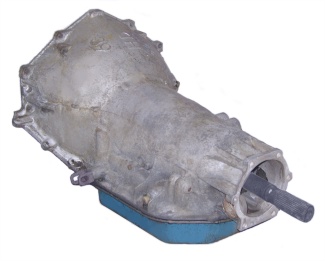 The TH400 is an automatic shift, three-speed, longitudinally positioned transmission. It is widely regarded to be a supremely durable and legendary transmission.

The TH400 is conservatively rated at 450 ft. lbs. of input torque. Aftermarket building techniques take it well past that figure.

The Turbo 400 was introduced in 1964 in Buick and Cadillac cars and in Chevrolet and Oldsmobile cars the following year. An innovative variable pitch stator was available in the 1965-1967 cars that could essentially vary the characteristics of the torque converter.

The TH400 made its way into heavier duty GM trucks in the 1970's in 2wd and 4wd configurations. The 400 was not just a GM exclusive transmission. It is an immensely popular transmission in the automotive industry as well as the aftermarket. They are found in GM's, Jeeps, Jaguars, Rolls-Royces, Ferraris and others.

As with other GM transmissions, GM changed the naming scheme of the TH400 in 1990 and it was then referred to as the 3L80 (3-speeds, Longitudinally positioned, 8000 lbs. GVW). An overdrive version of it was introduced as the 4L80-E. This electronically controlled transmission remains in production and wide use in heavy-duty GM and military applications.

The TH400 and Jeeps have quite a history together. This list is of the Jeep powertrains that had this excellent transmission. The TH400 came in 2wd or 4wd Jeeps, coupled either to the popular Model 20 (or Model 21, in a few rare cases) transfer case or the Quadra-Trac, the latter being an option from 1973 to 1979. The early versions had factory block adapters. Later AMC versions had their own case with no adapter.

The 400 transmission has a main case of cast aluminum alloy with a length of 24-3/8" long. Its aluminum case is essentially smooth. The rear mounting face of the transmission has a hex bolt pattern with ribs running forward longitudinally. The fluid pan shape is irregular (see image, left), being likened unto a distorted Texas pattern. The TH400 is the largest of the common GM auto transmissions, but still surprisingly compact in light of the immense power they can handle.

There are two significant variations of the TH400. The TH375 was a version of the transmission used from 1972-1976 in smaller displacement cars. It is identified easiest by its "375-THM" designation cast in the underside of the tail housing. The TH475 was an extra-heavy-duty version, and was found in larger trucks from 1971 on. 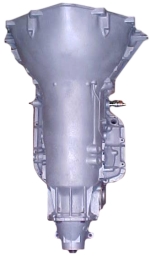 An interesting variable pitch stator feature of the Turbo 400 was available in 1965-1967 Buick, Olds and Cadillacs. These are identified by the two-prong plug on the case. While 1970-1974 models also had this plug, it is for the transmission controlled spark system. 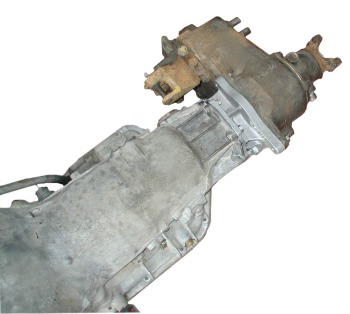 This transmission makes an excellent conversion transmission due to its adaptability into most Jeeps longer than CJ5s. Both 2wd and 4wd versions of the Turbo 400 can be used equally well, and there are no inherent advantages to either one once you have installed our adapter assembly.

It is of interest that the 1976-1979 AMC case, while more or less similar from the collar of the case, back, is tilted about four degrees. This was presumably for transfer case clearance purposes. Novak's #134 & #141 adapter designs compensate for this clocking to re-level the adapter and mount assembly.

2wd transmissions feature conical shaped tailhousings and an output yoke, which are replaced with a typically shorter 4wd style output shaft (included with our adapter assemblies) of varying lengths and spline counts, depending on the application. The HydraMatic can be adapted to the popular Jeep (and many IH) transfer cases, including the:

A factory Jeep design of the TH400 adapter to the Dana 20 transfer case. OEM adapters are highly prone to breakage. Novak offers a strengthened reproduction of this adapter (#8624113) to replace these broken units, in addition to our superior dual-bearing design #124 adapter kit.

A turn-key TH400, professionally built, OEM style or adapted and delivered to your door - ready for a variety of engines and Jeep transfer cases. Read more...

The front face TH400 is natively compatible with either the Chevy 90 degree “Small Block” & “Big Block” patterned engines (image, left), including the V6, V8, I6 & Iron Duke I4 (the latter mentioned only for accuracy and perhaps some comedy).

These differences only affect the front bell of the case, and all Turbo 400 cases are largely similar from that point back.

Buick engines and TH400's are natively compatible when choosing a Buick V8 or V6 version of the transmission. All Buick, Olds, Pontiac and Cadillac TH400's share the same engine pattern, commonly refered to as the "BOPC" pattern.

A part often overlooked by installers is the factory Jeep sizing ring or shim bushing between the TH400 torque converter pilot and the AMC crankshaft bore. This ring is critical for the precise centering of the torque converter to the crank. Failure to install this part can cause front pump failure and other issues.

The first Turbo 400s found in Jeeps had a factory adapter plate, while later AMC versions had a dedicated AMC style case.

The Chevy 400 can be made compatible with AMC I6 & V8 engines. See our Kit #437AMC for details. This conversion can help make for an improved Jeep powertrain over 727, 999, AW4 and other, lesser transmissions.

Novak does carry a full line of parts for the TH400 transmission, including OEM grade and upgrade components for individuals working on their transmissions. If interested, we welcome you to contact us.

A fantastically designed and built transmission, the Turbo 400 is broadly popular for Jeep conversions. They are very servicable, buildable and their strength puts them into the top tiers of Jeep sports and performance applications.