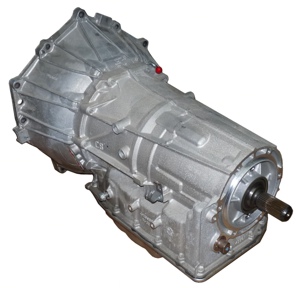 The 6L80 would have big shoes to fill, with legendary predecessors like the TH400, 4L80E and 4L60E transmissions. But, GM had been in transmission limbo, so to speak, needing a modern transmission to fill the duty gap between the excellently versatile 4L60E (and its tougher 4L65 & 4L70 variants) and the Allison transmissions. GM was still using their trustworthy 4L80E transmissions for heavier duty use, which was essentially a 1960's technology TH400 with added 1990's overdrive and electronic controls.

A horsepower revolution spawned by GM's increasingly powerful Gen. III+ V8 engines and their aggressive platforms such as the Cadillac STSV, XLRV, various trucks and SUV's and the venerable Corvette. The 6L80 was approved for use in these vehicles weighing up to 8600 lbs. or gross weight of 14,000 lbs.

The 6L80 denotes that the transmission is a 6-Speed, Longitudinally mounted, and for 8000 lbs. vehicle weights. It's RPO code is "MYC" and it is domestically manufactured in GM's Ypsilanti, Michigan plant. Newer to the transmission world is its use of direct clutch-to-clutch shifting and the total lack of bands. Because of this, the 6L80 - despite having two or three more gears than its predecessors, is unexpectedly short in length.

Maximum engine input torque for the 6L80 is 440 ft. lbs. and the maximum output torque is 664 ft. lbs. The case is a cast aluminum alloy.

The 6L80 features a generously deep first gear for an automatic, making for favorably powerful starts from a standing stop. The transmission lacks a direct-drive, but features two overdrive gears. The gearing spread is a very capable 6.04, with ratios in each gear as follows:

Recommended fluid is Dexron VI and it typically accepts a 10 quart thru 12.6 quart fill depending on its application. It features a dry weight of ~195 lbs. and can weigh up to ~230 lbs. full. Like earlier automatics, the 6L80 features one line pressure tap available for testing and diagnostic purposes. 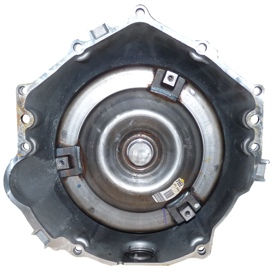 The torque converter is a fluid turbine drive and - like those on its predecessor transmissions, the TH350C, 700R4, 4L60, and 4L80E - features a lock-up pressure plate for direct mechanically coupled driving from the engine crank. As with earlier Hydramatics, the 6L80 will accept either the 258mm or 300mm torque converters.

To handle the increased output torque capacity, the 6L90 departed from the long-standing GM 32 spline specification output shaft of the 6L80 and went to larger diameter 29 spline for most truck applications. However some 2wd vans and HD truck versions had a 36 spline. Be aware of your output shaft version before proceeding with any adaptation. 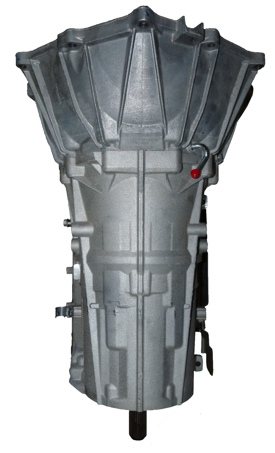 The Transmission Control Module (TCM) is an adaptive learning, 32-bit computer integrated into the valve body of the 6L80 / 6L90 and communicates with the Engine Control Module via the onboard vehicle CAN bus network. This is both a return to and a departure from previous automotive control systems in the industry in that earlier electronic transmissions used a separate control module, later to be integrated into the Engine Control Modules which were thus termed Powertrain Control Modules. Now, the high-speed CAN network allows a high rate of data sharing between the units to achieve a collaboration between both engine and transmission functions. The TCM is actually even programmed to adjust its operation for transmission clutch wear.

While not new to the 6L80, it uses an Input Speed Sensor to monitor input speeds to compare against engine speed and Output Shaft Sensor speed, using this data to adjust shift speeds under instantly detectable conditions. The transmission can also signal the engine to drop power during a shift if there's a possibility of clutch damage. Shift stabilization is achieved through these and similar strategies. Grade braking and clutch line pressure (for greater holding power) are additionally great features that are activated by Tow / Haul mode on the truck platforms. 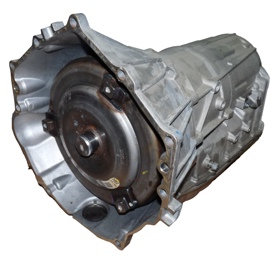 The 6L80 is a modular transmission, featuring removable bellhousings and tailhousings for interchangeability with the GM 90 Degree engines and other potential engines in the future.

While the 6L80 is generally mechanically compatible with Chevrolet and GM Gen. III+ engines, due to its advanced control strategy, the 6L80 is functionally compatible only with Generation IV GM engines and their matched Engine Control Modules.

Electronic challenges exist when mixing and matching the 6L80 as they must be matched to their particular engine. In a similar vein, GM Gen. IV engines do not always take kindly to other transmissions such as manuals (essentially no longer available from GM), and most automatics that predate the 6L80. Special engine computer programming strategies may be required.

The 6L80 is doubtless a very successful OEM transmission, and a terrific conversion transmission in the right Jeeps and situations. However, it is a long transmission and is not compatible with short-wheelbase Jeeps such as the CJ5. 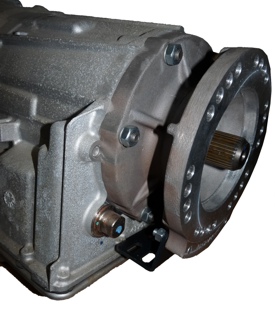 The 6L80, adapted and ready for a Jeep Dana 300 and the Jeep New Process transfer cases.

This transmission makes an excellent conversion transmission due to its adaptability into most Jeeps longer than CJ5s. Both 2wd and 4wd versions of the 6L80 can be used equally well, and there are no inherent advantages to either one once you have installed our adapter assembly. 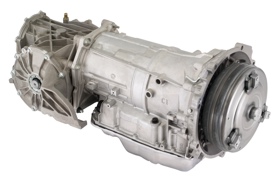 The 6L80 in its transaxle version for the Corvette

The 6L80 has surprised us power transmission aficionados with its wholesale adoption of new and very different technologies. What is most welcome about it is that it is a very durable, functional and impressive transmission assembly and appears to have a terrific prospect with GM and the aftermarket community.