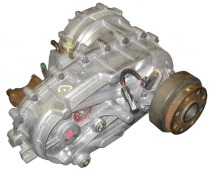 In 2003, and in response to the trends of off-roading, Jeep introduced the NP 241OR RockTrac transfer case in the upgraded Rubicon package in the TJ Wrangler Jeep.

The increased strength and capability of the NVG 241OR, make it desirable to retain in nearly every conversion situation.

The 241OR, to date, is only found in Jeep vehicles.

The 241OR has a driver's side front output and centerline rear output. The 241OR features two ranges; a low range gear that is an impressive 4.0-to-1 (the lowest of all the Jeep transfer cases) and a direct-drive in high range. It features three modes; two-wheel-drive, four-wheel-drive and neutral - for a factory combination of 2H, 4H, N, 4L. Aftermarket modifications allow for the addition of a 2 Low position.

2003-2006 RockTracs feature a three-wire, digital square wave Vehicle Speed Sensor (VSS) on the short tailhousing assembly, in the vein of modern automotive systems. 2007-current RockTracs do not feature a VSS, as speed sensing is relegated to the ABS computer, which in turn relays speed information to the ECM.

The design of the 241OR is very good. They were engineered for durability and simplicity of build - both an advantage to the OEM assemblers as well as individuals servicing them. The NP241OR transfer case has turned out to surprise us in its strength, gearing, upgradeability and servicability. Most of our customers choose to retain their Jeep 241OR with their conversions. It is very common for them to offer good service behind some of the strongest engines and transmissions.

This transfer case is identified by its red and silver tag on the rear of the case. They are also easily identified by appearance. They feature a six-bolt front face.

Though similar in nomenclature, size and configuration to the NP241 transfer cases, this unit has its own case and many unique internal parts. It has a fixed yoke output assembly with an integral electronic speed sensor. The transfer case halves are unique in the overlap of the input assembly required by the larger planetary gears, and the rear half is engineered with generous ribs to handle the increased torque.

To date, this transfer case features only a short 23 spline input gear. It is fully compatible with our full line of transfer case to transmission adapter assemblies.

The Jeep 241OR is found behind these factory transmissions:

Adaptation to better transmissions is often less costly than rebuilding the weaker Jeep gearboxes and provides serious performance and strength upgrades. The 241OR adapts very well to several popular transmissions, including: 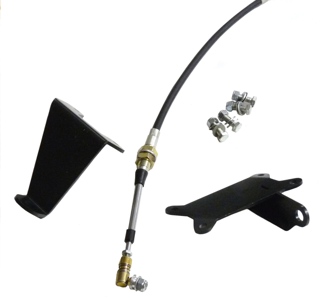 Factory linkages for the 241OR are problematic and hard to work with. These convoluted linkage systems can be entirely replaced with Novak kit #SK3XR, our smooth shifting, universal shifter. This shifter assembly also simplifies the upgrade to the above transmissions.

The 241OR was welcomed by Jeep enthusiasts. It appears to not be letting them down.