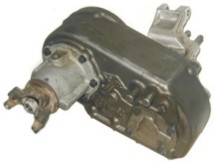 The Dana 300 is found in 1980-1986 Jeep vehicles. It is one of the most respected transfer cases and is regarded as the gold standard by casual Jeepers up through the enthusiasts. While only provided in 1/4 Ton rated Jeeps, its strength surpasses this duty.

The Dana 300 contains the culmination of what Dana learned about transfer cases since building the 300's predecessors - the Dana 18 since 1941 and then the Dana 20 since 1962.

Design work of the 300 began by 1977. It was to be similar in size, duty and ease of manufacture to the popular Dana 20. It featured the same center-to-center distance between gears as the 18 & 20 and featured a direct drive rear output. Different from these forebearers were the rear or low set of gears, which were helically cut, in lieu of the straight cut gears. While not any stronger than straight cut gears, they allowed the transfer case to run quieter in its low range.

The Dana 300 is a cast iron transfer case, having a passenger-side front output and a centered rear output. It has a round, six-bolt front mounting face. It has a smoother case design with fewer cast-in bosses for mounting features.

Instead of having a transmission mainshaft-mounted input gear like previous Dana's, the 300's input gear rides on its own, bearing mounted input shaft. This shaft (in factory dress) always has 23 female splines. The helical input gear itself is mounted on 30 splines.

The IH Scout version of the Dana 300, built only in 1980 - IH's last year in the light truck market - has the same "backwards Texas" bolt pattern and transmission mounted input gear as did the Dana 20 found in previous IH vehicles.

Should I change from a Dana 20 to a Dana 300?
We get this question a lot. There is probably no significant strength advantage to the 300. It does feature a lower range gearset than the 20. However, the Dana 20 is typically shorter, allowing for better driveshaft angles. Additionally, transmission interface differences make the upgrade challenging, unless a later, 300 compatible transmission is also swapped in. This, however, is not desirable as these later transmissions were usually weaker than the previous versions available with the 20.

Gear shifting between ranges and modes in the 300 is handled differently than the previous Dana boxes, which used a sliding gear and a sliding clutch. The 300 uses sliding clutch rings for both.

The 300 has a standard, factory single-stick shifter. There is an interlock pin between the shifter rails. Removal of this interlock allows for the added function of 2wd/Low and front-wheel-drive High or Low to the 300 - if you have the "twin-stick" version of the 300.

The 1981 and later versions had a longer output assembly (about 5-1/2") to house the larger, eccentric style speedometer driven gear and its driving gear, integrated into the output shaft itself.

The Model 300 is found in these vehicles:

We are often asked our opinions about the strength of the Dana 300.

The known fuses of the 300 include its output shaft, which can fail under extreme duty or momentary shock load. The 300 can also, though far rarer, have teeth blown off it's rear gearset. Broken cases or other components are only very rarely seen.

The 300 uses all helically cut gears. It uses a large 1.25" intermediate shaft. The Dana 300 is strong enough from the factory to handle even the most potent engines and situations. An engineering analysis and years of combined experience shows that the rear set of gears (the Low output gears) are unbalanced and weaker in their strength with the front set. However, breakage of these teeth is relatively rare.

It is nearly remarkable how much power this compact transfer case can transmit and sustain. It is not uncommon to see them handling Big Block grade power and deep, compound gearing. 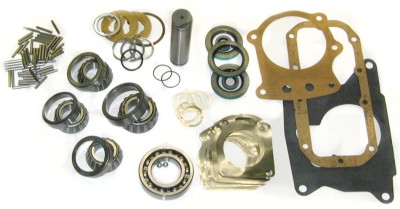 A benchtop rebuild of a Dana 300 is doable and possibly even enjoyable by an experienced technician. Parts are readily available both new and salvaged, along with standard rebuild kits that address the common wear points.

Our parts, which include a specially hardened intermediate shaft, are always available and kits have been configured to address the wear points and upgrade where possible.

Many components remain available. Ask us if you require something for your 300, not seen in our catalog.

The Jeep 300 is found behind these factory transmissions, left:

1981-1986 Dana 300 speedometer gears are interchangeable to correct for tire size and axle ratio changes. See this page to learn more about this.

When filling your 300 with gear oil, we recommend that you select a conventional mineral oil or a para-synthetic in lieu of a full synthetic oil. Properly assembled manual gearboxes do not have the thermal strains seen by combustion engines or hypoid gears. Synthetic fluid in these gearboxes, while not harmful, is probably an economic waste.

Hypoid gear oil is sulphurized higher than transmission oil and can be mildly corrosive to the non-ferrous alloys used for thrust washers in these transmissions.

The Dana 300 is among the best transfer cases ever built. Their strength, ease of service, compact design and excellent parts support make them a top choice in many Jeeps. The Dana 300 was the last of the cast iron, gear-driven transfer cases to be found in a factory Jeep. 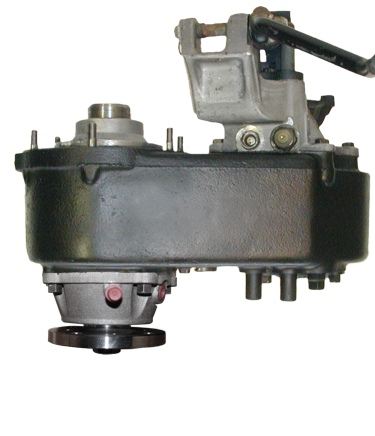 The 300 is amazingly strong, but its original rear output shaft is can be broken under high-loads and is excessively long. The #300RX output assembly is Novak's answer to these problems.