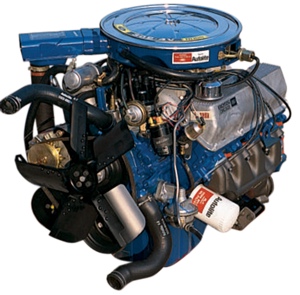 Not to be outdone by the Chevy Small Block for long, Ford introduced its 221 V8 in 1962. That same year, Ford increased the piston bore to produce the 260. It rose quickly in popularity and soon afterwards (1963), became the 289 and then the ubiquitous 302.

It should be noted that the 351 CID Small Block Ford V8 is longer than other Ford engines of the Small Block series.

The 302 evolved into the 5.0 and 5.0 HO. These motors, especially the latter, were outstanding powerplants. With the benefit of fuel injection and other refinements these engines more than ever, gave Jeep-owning Ford enthusiasts something to get excited about in regards to engine conversions.

The Small Block Ford V8 began life being built in Windsor, Ontario and thus its "Windsor V8" nickname. Production of this engine was later moved to Cleveland, but the Windsor motor is not to be confused with the different "Cleveland" family of engines.

The 351 Windsor also belongs to the Ford Small Block family - not to be confused with the mid-sized-block 351 Cleveland, a different engine of the 335 family. The "Modified" engines are also in a different vein, and not generally as popular or well suited for Jeep conversions.

These motors recieved steady improvements throughout their 33 year evolution, and in 1996 they were OBD-II compatible. Regrettably, this would be the last real production year for the 5.0L & 5.8L Ford Small Block V8's. Many enthusiasts see this as a disappointment and the passing of an era at Ford.

How to Install the Ford V8 into Jeep Vehicles

The Ford Small Block becomes a particularly attractive option when one considers that it is readily compatible with the Ford T18 and Ford NP435 heavy-duty four-speed transmissions - popular gearboxes for swapping into Jeeps of all eras.

To keep things especially exciting for interchangers, Ford changed the flywheel balance from 28.2 oz. to 50 oz. in 1981. Early vs. late Windsor V8's must be matched with their respectively balanced flywheels.

In keeping with this tradition of difficult Ford-to-Ford compatibility and outright incompatibility, the Ford Modular series engines have a different block / bellhousing bolt pattern than these mainline Windsor motors.

Some popular Ford V8 transmission choices in Jeeps include:

The Small Block Ford V8 can be installed in most Jeeps although sometimes not quite as simply or economically as the Chevy V8. Parts interchangeability is not nearly as good as on Chevy V8. However, Ford enthusiasts who know these motors and their parts interchange information well, swear by them and install them with good success.